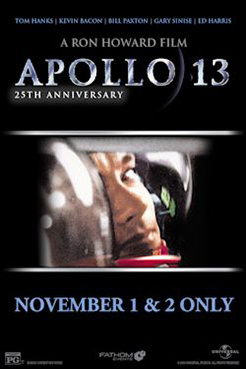 It's been 50 years since the Apollo 13 mission, and 25 years since the premiere of the stunning dramatic rendition that brought the historic flight and its crew to life for a new generation. Nominated for nine Academy Awards®, including Best Picture, the real-life space flight that gripped the nation and changed the world is returning to theatres for a special in theatre event in honor of the anniversary of both the movie and the mission.